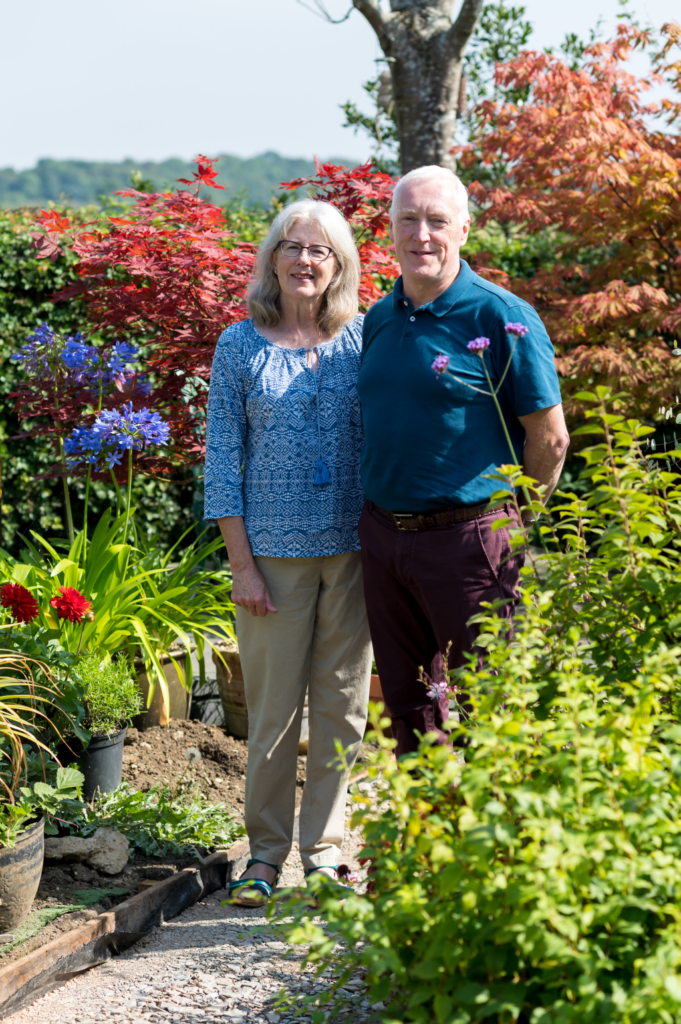 A couple of years ago, Tony sent me some photos of the mountain bike crash he had endured.

It was a pretty severe accident, as were his injuries, but one of the photos he sent bought some degree of humour to the event. He had fallen forward off his mountain bike and had the indignity of then being run over by his own wheels. The photo, taken by a friend of his, showed the track mark across the back of his shirt!

The x-ray photos he sent me of various bones pinned together with metal were much less amusing.

This incident is indicative of the humour of Tony & Bea. They have a great sense of humour and are “smiley” people.

Andy Bodman and I have met with Tony & Bea in a country pub just outside of the village in which they live in Northamptonshire. We enjoy beer-battered fish and chips, but each of us has declined the pot of curry sauce offered with the food! We discuss this mix of fish, chips and curry sauce and debate whether it is a Midlands or Northern thing, although Tony points out that when he was in Ireland, he encountered a “curry half and half” (half rice and half chips), who knew?

Tony and Bea are long-standing clients of Informed Choice and more recently have benefited from the full financial planning process as they transition from work to retirement.

We talk a lot in the Financial Planning profession about “transition in people’s lives”, and a lot has changed in the last year or so for Tony and Bea because Tony left the company he worked for a very long time. He didn’t know whether they had enough money or if he would have to find further employment, so the financial planning process demonstrated they could do all the things they wanted to in retirement and not run out of money.

They met each other through mutual friends and had spent the evening in a pub local to where Tony was living in Kent. Bea had travelled to Kent from her home in London to spend the weekend with a friend. Tony’s interest in Bea was evident from the start because he kept taking trips up to the bar to buy drinks and chose the spot right next to Bea to park his pint, so he had to lean past her each time to pick it up!

Long story short, Tony invited Bea to a dance a couple of weeks later, and they became a couple. Pretty soon, they moved to Northampton, and that has been their home county ever since. They married in 1989.

Bea loves gardening, and she describes how she has had a really good month in the garden. She says that her garden is too small for her horticultural ambitions, such, I guess, is the lot of many gardeners. Bea does, though, have lots of pots and containers, and as those with a small garden will know, this provides the scope for expansion of the number of plants you can have.

Bea makes up for her small garden by helping other people in their gardens, and she does so simply for her love of gardening. Often she finds she has committed to an hour or so of helping to discover that she is still there three hours later, sometimes to be told, “do you know what the time is? You should really go home now?!”

As well as the plants, we discuss the wildlife they spot, and Bea waxes lyrical about the Scarlett Tiger Moth they have seen black with red patches standing out against the green of the leaves.

Tony and Bea have three grown-up daughters, each with their careers in hand. Emily is a teacher in a local school, Grace is working on her PhD in Liverpool, and Alice is an audiologist in a local hospital. There is little doubt that a considerable chunk of Tony and Bea’s lives has been raising their family and setting their children on their successful career journeys.

Tony tells us about the project on which he is working. He is building a bike park, a project that he says has helped keep him sane during the last year of the pandemic. Funding for the bike park is from the local council and British Cycling. The park is designed for mountain biking rather than cycling and BMX. And it’s aimed at everyone of all ages, not just the youngsters.

We return to the subject of retirement and financial planning, and it is great to hear it from the side of Tony and Bea, our clients. Andy Bodman reminds them that there was a definite shift between the first and second times they met.

Whereas the first time, the focus was on building up the retirement pot and investing their pension funds, there was no “counting down of the days” to retirement. The second time, it was clear that work wasn’t missed, and Andy remembers the big smiles they had on their faces.

“I didn’t miss it at all from the day I walked out,” says Tony. It was clear that having the confidence to retire removed a great deal of the stress that work delivers. The financial planning process evidenced that they could afford not to return to work if they didn’t want to.

“I’d love to do Scotland, to tour around Scotland, a revisit in actual fact,” because they went there for their honeymoon. They aren’t sure if they would do that in a motorhome or some other way.

We chat about a vast range of subjects, and two and half hours have passed before we know it. That’s what it’s like with Tony & Bea because as well as being interesting, they are also interested. Andy Bodman reminds me that we need to leave soon because England versus Germany in the Euros kicks off at 5.00 pm (I arrived home to watch it 2 mins after kick-off).

Tony and Bea leave to go home to gardening, bike park project management, catch up with their three girls, or to enjoy the fact that they don’t have to go to work anymore.

This article first appeared in the October 2021 edition of Informed magazine.