The UK economy has ground to a sudden halt in August, with a post World Cup economic slowdown suggested by the latest official figures. According to the Office for National Statistics, GDP growth in August fell to 0%, down from 0.4% in July. Economists were forecasting growth of 0.1% in August. According to analysts, robust growth earlier in the summer prompted by hot weather and World Cup influenced spending faded away in August. The rolling three-month GDP figure showed the strongest growth for almost two years, at 0.7%. Schroders Senior European Economist, Azad Zangana, said:

Overall, the headline GDP figures mask some underlying weakness. On a quarterly basis, even if GDP stalls again in September, growth for the third quarter would be 0.6%, which would be the best quarter of growth since the end of 2016.

However, it would mean potentially a weak end to the year. In our last look at the expenditure breakdown of GDP, we found that final sales were actually in recession, as final demand had not kept up with output, meaning that the economy was building inventories. The lack of growth in August may be in response to this. 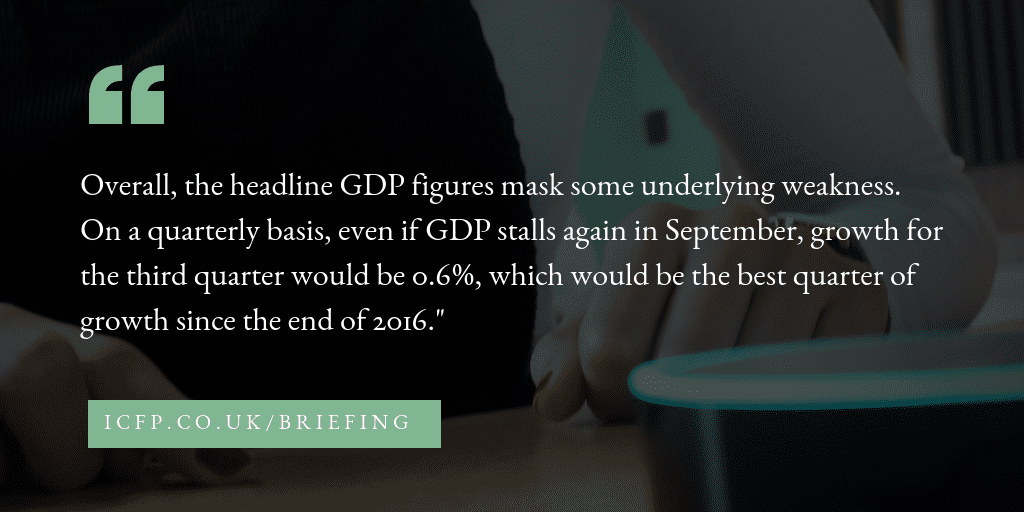 The Financial Stability Board has published a new report considering the future financial implications of crypto-asset markets. This report sets out the analysis behind the FSB’s proactive assessment of the potential risks of crypto-assets and financial stability. It follows up on the initial assessment set out in the FSB Chair’s March 2018 letter to G20 Finance Ministers and Central Bank Governors, and the summary of the work of the FSB and standard-setting bodies on crypto-assets the FSB published in July. The report published today includes an assessment of the primary risks present in crypto-assets and their markets, such as low liquidity, the use of leverage, market risks from volatility, and operational risks. Based on these features, crypto-assets lack the key attributes of sovereign currencies and do not serve as a common means of payment, a stable store of value, or a mainstream unit of account.

Chancellor Philip Hammond will position Britain as the “natural global home” of new and innovative financial services after Brexit at the IMF Annual Meeting in Bali this week. With financial technology as the designated theme of the gathering, the Chancellor will herald Britain’s approach to using technology to save customers money, and open up the market to popular new banking apps. Britain will use its world-leading expertise and influence in finance to shape global views towards new financial technology, Philip Hammond will say at the IMF Annual Meetings in Bali. He will add that he wants Britain to lead global efforts to design a regulatory approach to cryptoassets and distributed ledger technology. This will mean people are able to manage their money and be confident it is safe, while allowing the life-changing potential of any new financial technology to flourish.

Speaking before departing for the Annual Meetings, Philip Hammond, said:

International cooperation has made our financial system safer, simpler and fairer since 2008.

At home, our banking reforms have protected people and given them more confidence that their money is safe.

The UK’s world-leading expertise means that we are in a unique position to shape the future approach to emerging technology like blockchain so that they benefit businesses, people and the economy.

This week I’ll be making sure British interests are represented at the very top of international finance.

Bad day on the markets

US company shares have experienced their sharpest one-day falls in months, with negative investor sentiment due to rising interest rates, price inflation and intensifying trade tensions. The Nasdaq index, which focuses on tech firms, fell by 4% or 315.9 points, to 7,422 points. The Dow Jones and S&P 500 both fell by more than 3% on Wednesday, with losses accelerating as the market close approached. The Dow Jones index fell 831.8 points, or 3.15% to 25,598.7. The S&P 500 fell 94.6 points or 3.29% to close at 2,785.6 points. Earlier in the day, company shares in France and Germany closed down more than 2%.

A new report suggests property surveyors are increasingly unsettled by the possibility of a house price crash in the event of a no-deal Brexit. The latest figures from the Royal Institution of Chartered Surveyors show its headline house price balance fell to -2 in September, a four-month low. This latest reading was below a recent poll of economists. Surveyors reported their lowest outlook for prices in three and twelve months’ time in more than two years. RICS Chief Economist Simon Rubinsohn said:

Uncertainty relating to Brexit negotiations is at the very top of the list followed by references to the confidential remarks made by the Bank of England Governor to the cabinet.