The Briefing on Wednesday 29th August 2018

A letter being sent to leading Defined Benefit pension schemes encourages trustees to consider cutting the transfer values on offer when workers transfer out of the pension scheme. The letter, obtained in response to a Freedom of Information request by insurer Royal London, has been sent to several large pension schemes who have been experiencing a large volume of transfers. It’s part of a drive to protect members from unsuitable transfers and from pension scams. But the letter also raises concerns that if trustees offer overly generous transfer values to those leaving the scheme this could be to the detriment of those left behind.

Commenting on the correspondence, Steve Webb, Director of Policy at Royal London said:

I would hope that well run pension schemes would be taking expert advice when deciding how much to offer to members wishing to transfer out. But the Regulator’s letter is a helpful reminder to all schemes that they need to be fair not only to those transferring out but also those left behind, especially where the scheme in question is in deficit. 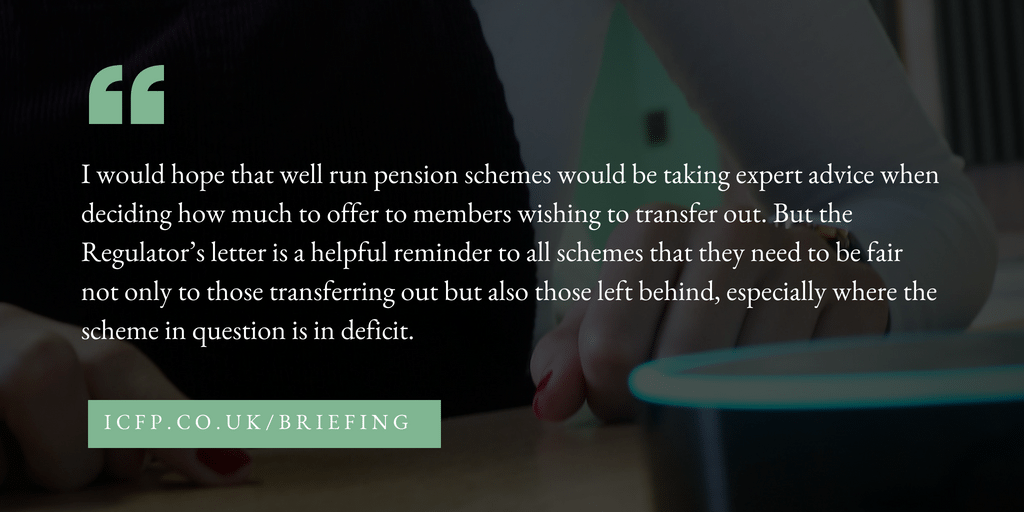 Shop prices in Britain rose for the first time in more than five years during August. Despite the rise, prices rose by less than the broader price inflation figure. According to the British Retail Consortium shop prices were up by 0.1% on year-on-year terms. It brings to an end a run of 63 months of falling shop prices, with prices rising as a result of the hot summer and rising international fuel prices. Competition between shops has generally kept prices down, despite rising price inflation.

Explaining that inflationary pressures would grow in the event of a hard Brexit, BRC chief executive Helen Dickinson said.

If that does happen retailers will not be able to shield consumers from price increases.

Central banks could ditch Sterling and Euros if Britain leaves the European Union without a trade deal in place. That’s according to a note published by Bank of America Merrill Lynch, showing £100 billion worth of the currency is at risk of being sold from central bank forex reserves. In the event of a no-deal Brexit, central bank currency selling could prompt a significant fall in the value of Sterling. Global reserves of the currency are currently worth approximately $500 billion.

In a scenario that central banks adjust their sterling holdings back to the long-term average (3.6 percent), this suggests that they could sell upwards of 100 billion pounds in sterling reserves on a no-deal scenario, all else being equal.

British sports car maker Aston Martin is expected to confirm its plans to list on the London Stock Exchange. It said it was considering a public listing or selling to a buyer earlier this year. Selling a £1bn stake in the firm would value the carmaker at between £4bn and £5bn. They sold 5,000 cars last year and made a profit for the first time since 2010. New models are expected to boost output “significantly” above its current level.

Bank of England governor Mark Carney has been asked to extend his tenure to help calm City nerves around Brexit. According to a report, Carney has been asked to continue in the role past his current departure date of June 2019, just months after the UK is set to leave the European Union. The Evening Standard has also claimed there is a lack of suitable candidates to replace Carney. FCA chief executive Andrew Bailey is currently being tipped as the leading contender for heading up the Bank of England, on a short list which also includes former Bank policymaker Minouche Shafik.

The Bank of England declined to comment on the report and a Treasury spokesman said:

“We will begin recruitment for the next Governor of the Bank of England in due course.”