It’s been an anniversary week for me.

Forty-eight years ago, I passed my driving test on the streets of Clifton in Bristol.

I was only 17 and wearing my school uniform and was relieved when, despite some minor errors, the Test Officer gave me a slip of paper confirming I had my full licence.

I am pleased to say that licence has never had any points on it!

One year later, I started my first full-time job.

I had spent the summer after my A-Levels (failed both of them!) travelling around Europe on a rail ticket with three friends. Sadly it only lasted a short while as we used up all our money paying for medical treatment for two of them (glandular fever) and were back in Bristol in a shockingly short time.

I took on some work during the summer, stacking plastic trays and working on a building site digging out a coal cellar at a local school renovation.

My first “real job” was with Phoenix Assurance as a trainee life underwriting clerk.

Phoenix has a long history starting as a fire risk insurer and in the reception of the building on Redcliff Hill (now a hotel I believe) was an old hand-pumped fire engine owned by the insurer.

This engine and crew would attend fires and put them out as long as the building had the requisite fire-mark on them; otherwise, they would turn round and let the building burn! 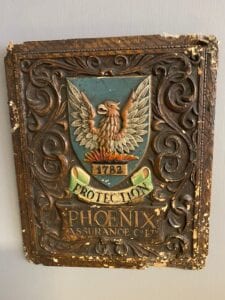 Some years later, I found the fire-mark in this picture at a car boot sale. It’s not in perfect condition, but it brings back memories.

The top floor of the building where I worked was entirely devoted to the mainframe computer, and the computing power of that machine was probably less than the laptop on which I am typing this!

Battery driven calculators were in their infancy!!

I was lucky to have some great supervisors and an outstanding manager to teach me the job. They probably were not that much older than me, but to an 18-year-old they seemed like proper “grown-ups”.

The department manager had some fundamental rules that have stood the test of the last 47 years.

He wanted all telephone calls answered on the first ring. Behind his back, we called him “one-ring Ron” but we would never have said that to his face.

He also taught us that mistakes happen, but they should never be covered up.

If you went to Ron with a file and explained the mistake you had made, and what you proposed to do about it, you would only ever get praise.

But anyone who ever tried to cover up an error was in for a torrid time.

Phoenix had a thriving sports scene, and as an avid footballer, I played for the company football team for three years.

We had a splendid sports facility with a football pitch marked up on the County cricket ground where first-class cricket is now played. I am pretty sure that would not be allowed these days to the relief of many cricket fans, I am sure.

I stayed with Phoenix for six years moving to Birmingham and a new job role the year that Andy and I were married.

I have no doubt that the values that were taught to the intake of young people at Phoenix back in September 1973 have stood us all in good stead for the careers that we have had since then.