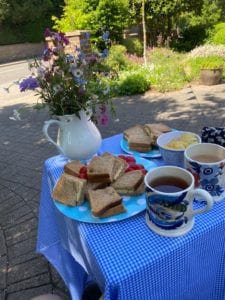 Well, that’s another week of working from home completed.

So far we have been lucky with the weather, but as I write this, the north winds have bought a lowering of the temperature and some strong winds.

We were lucky though with the weather at the weekend and Friday saw a lovely sunny day for the VE celebrations.

Social distancing meant that Andy and I couldn’t have the family around to join us, so we had our lunch on the driveway together.

I said to her that I thought it was a bit weird to do that, but she said: “everything is a bit weird at the moment, this isn’t any more so!”

She was right of course, and plenty of people waved and said hello as they passed and a couple stopped for a socially distanced chat.

In the garden, the Robins have nested again.

This time they have moved from beside the kitchen door to the side of the house. I am a bit concerned about this one though because it’s quite visible. 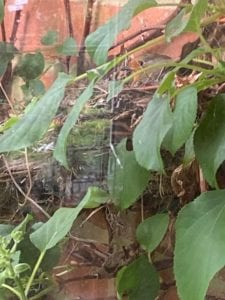 At the weekend the Wood Pigeons who had nested on that side of the house were attacked by Magpies; I fear the same for the Robins.

Each week we participate in a Thursday night (just after clapping for the NHS) quiz and this week Andy and I won the competition!

We have also started a Tuesday evening Informed Choice team quiz, and that was very well received.

Our first quiz master was Andy Bodman (known as Bodders to the team), and his first-round was entitled “Who Noes?”

He had taken the photos for the team from our website and cut them down, so the picture was just of each person’s nose. Do you know how difficult it is to recognise your colleagues only from a picture of their nose?!

The one task I do carry out from the office is to take the post that has to be sent securely to the Post Office, which is open for just a few hours each day.

The queue is generally about 12-15 people, and as only two are allowed into the Post Office at the same time, this can take 50 minutes to complete.

The good news is that people seem to be obeying the rules and standing at least two metres apart.

However, this morning one lady decided she would approach people in the queue to ask if she could go ahead of them as she was in a hurry.

She did this almost face-to-face with the other customers; she got a real telling off from a health professional in the queue. Some people will never learn!!

The good news is that there does appear to be some element of change occurring in the lockdown.

Let’s hope it’s not too much too soon, but hopefully, we can enjoy some more flexibility without causing another spike in infections.

Challenge what you are told

Informed Choice chartered financial planner Nick Bamford explains the importance of challenging what you have been told by any adviser.

Death and taxes. The only two things said to be[...]