In this edition of The Briefing from Informed Choice on Monday 8th October 2018 – cheapest homes out of reach, Facebook pays more tax, Brexit anxiety rises, financial wellbeing at work, and bank wealth tie-up.

Cheapest homes out of reach

Four in ten young adults are unable to buy one of the cheapest homes in their area, even with a 10% deposit. This is according to new research from the Institute for Fiscal Studies. They found that, in 1996, local property was affordable for 90% of 25 to 34 year olds who had a 10% deposit and borrowed four-and-a-half times their salary. In 2016, only 60% of young adults in this age group could afford the same. The IFS found the situation was worse for those wanting to buy property in London, were only one in three young adults could afford to buy one of the cheapest homes in their local area. The report said that average house prices in England have risen by 173% in the past twenty years, with real incomes for young adults rising by just 19% in the same period.

Polly Simpson, a research economist at the IFS who co-authored the report, said:

Big increases in house prices compared to incomes over the last two decades mean that it is increasingly difficult for young adults to get on the housing ladder, even if they do manage to save a 10% deposit.

Many young adults cannot borrow enough to buy a cheap home in their area, let alone an average-priced one. These trends have increased inequality between older and younger generations, and within the younger generation too. 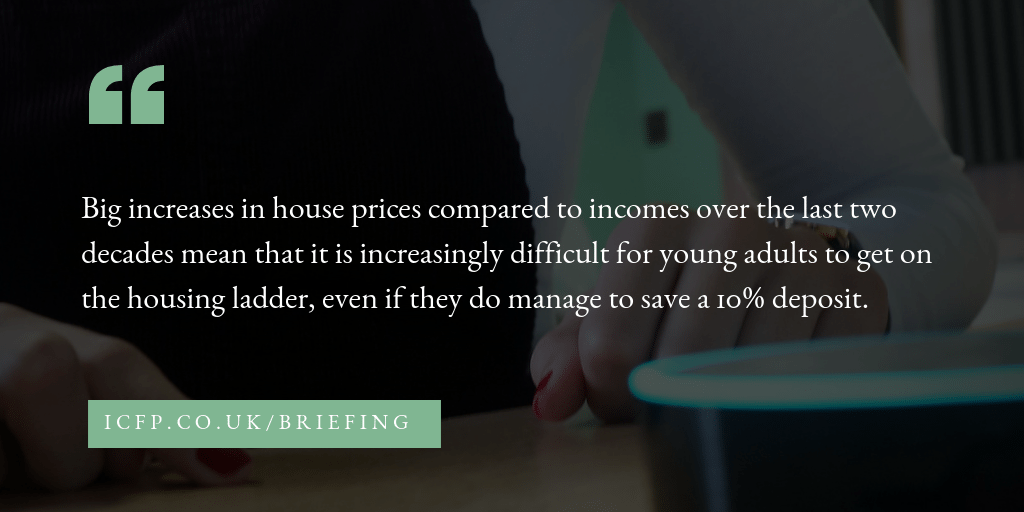 Social media giant Facebook paid more than three times as much tax in the UK last year than in the previous year. Facebook’s UK corporation tax bill rose to £15.7m in 2017, up from £5.1m in 2016. The higher tax bill follows an overhaul in Facebook’s tax structure in the UK. Facebook’s profits only rose £4m in the UK, from £58.4m to £62.7m in 2017. Its revenues rose by a third to £1.2bn, as a result of higher income from inter-company and advertising reseller services. Facebook gave 1.48 million shares to employees last year, in a move which reduced its corporation tax bill.

Brexit anxiety among British business has risen to its highest level since the referendum in 2016. A study by accountancy group Deloitte found that more firms are scaling back their hiring and investment plans as a result of Brexit uncertainty. Their latest survey of chief financial officers found that only 13% are more optimistic about business prospects at their firms than three months earlier. This is down from 24% in July. 79% of CFOs believe the long-term business environment will be worse as a result of the UK leaving the EU. This was up from 75% in the second quarter and represents the third consecutive quarterly rise. Ian Stewart, the chief economist at Deloitte, said:

CFOs have become more pessimistic about the long-term effect of the UK’s departure from the EU.

Large corporates are pulling in their horns, with just 12% of CFOs saying now is a good time to take a risk and 44% expecting their own capital spending to be lower over the next three years.

Indeed, CFOs are more negative about the effects of Brexit today than at any time since the EU referendum.

A third of UK employers think that high employee stress levels are a direct consequence of their staff not having enough savings, including pensions. That’s according to the latest Close Brothers Business Barometer. A further 25% have seen employee health issues arise due to money worries, and 14% have seen higher absenteeism for the same reason. Only 17% of employers think that poor financial management by their staff has no impact on their business. Despite this, nearly half of UK businesses neither offer financial education to staff nor plan to do so. A mere one in five businesses provide financial education to their workforce, and of those, 14% describe the service they offer as ‘limited’.

It’s clear that employees are not saving enough, nor are they saving in the most effective way. This is true for both short and longer term financial planning including pensions.

Employers are perfectly placed to help their workforce become more confident and competent in financial decision making, in turn having a direct impact on their financial, physical, and emotional wellbeing. Those who receive financial education find it useful in guiding their immediate, medium, and long-term saving decisions. This then frees up employees at work to be happier, healthier, and more productive.

As such, having a comprehensive financial education strategy is a win-win for employers. It could even go some way towards solving the UK’s productivity puzzle.

Lloyds Banking Group is reportedly planning to enter a new joint venture with Schroders, injecting £13bn into the firm. According to a report by Sky News, Lloyds is finalising the deal ahead of an announcement later this month. It will result in Lloyds owning 50.1% of a new joint venture, with Schroders owning the balance. The joint venture is aimed at allowing Schroders to access the mass affluent customer demographic, with sources telling Sky the transaction would harness Schroders’ technology and investment management capabilities and marry them with Lloyds’ vast distribution network, fulfilling the strategic objectives of both partners. Another part of the deal would see Schroders taking on a £109bn investment mandate from Scottish Widows, the product provider owned by Lloyds.