Consumers are continuing to switch from cash to alternative payment methods, and ATM volumes are falling 6% year-on-year. 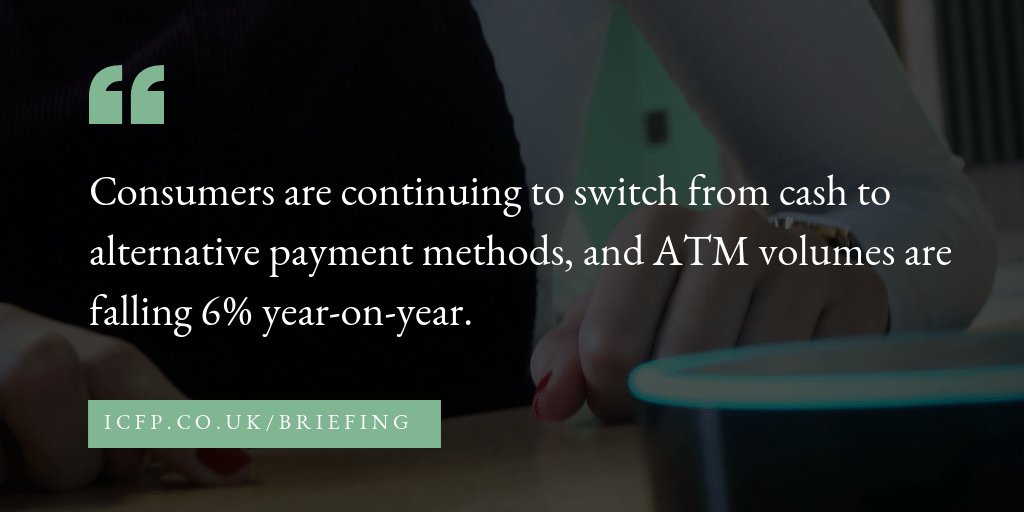 An option to merge House of Fraser and Debenhams have been discussed, according to a non-executive director. Simon Bentley, who serves on the Sports Direct board, made the announcement at their Annual General Meeting. Bentley is leaving the business today after 11 years as a board director. Sports Direct owns House of Fraser after buying it last month and owns nearly a third of Debenhams. His comments follow the unexpected departure of Sports Direct chairman Keith Hellawell. The news follows speculation by analysts that the two firms could merge.

Energy supplier SSE has reported ‘disappointing’ and ‘regrettable’ performance in the first five months of its financial year. Blaming relatively dry, still and warm weather, and persistently high gas prices, the firm expects profits in the first half of the year to be around half of those reported a year earlier. Shares in SSE fell by 8% on the announcement.

Lower than expected output of renewable energy and higher than expected gas prices mean that SSE’s financial performance in the first five months has been disappointing and regrettable.

New research has shown the true effect that the government’s 30 hours free childcare scheme has had on hourly childcare costs. The research comes from Yoopies, one of Europe’s biggest online care platforms, and shows families using in-home care – such as nannies – have suffered compared to parents with children in funded preschool or nursery places. Hourly prices for in-home childcare rose by by 4.1% in the last year alone, increasing from £8.16 in 2017 to £8.50 in 2018. This cost jump makes a huge difference to the bank balances of working parents. Those in full time jobs with a preschooler cared for at home are now spending an extra £68 per month compared with last year. The boost in rates has been seen just one year after the government launched its 30 hours of free childcare scheme in England, an initiative which was supposed to reduce childcare costs rather than increase them.

Lisa Lambert, spokesperson for Yoopies and a working mother of two said:

It’s clear that the 30 hour scheme has really not delivered in reducing hourly childcare costs for working parents. The scheme has put so much financial pressure on early education providers that they are having to close or will only offer funded places on limited days. Parents have no other choice than to turn to the more flexible option of a nanny, which comes at a cost. If the trend continues then hourly rates are likely to get higher and higher. Nanny care is currently not part of the 30 free hours scheme but this needs to change if the government want to support working parents.

With Pension Awareness Day taking place this Saturday, Fidelity International have analysed pensions pots finding a significant 11% gap between men and women’s future savings. Based on ONS projections and adjusting for inflation, the average pension pot for a man currently aged between 25-34 will be worth £142,836 at the State Pension age of 68. This falls to a pension pot of £126,784 for women. According to the research, more than half of women who hold a pension do not know where it is invested and close to a third of women don’t know how much their pension is worth.

By the time women are nearing retirement (aged 55-64) our pension pots are on average half the size of a man’s the same age. Yet, our life expectancy is longer than that of men, meaning we may require more care in old age and must make our money stretch over a longer time. Solving the gender pay gap may be some way off, but there are actions women can take now to secure their financial future.”

Our research found that if a woman contributed an extra 1% of her salary to her pension than she could close the gender pension gap by retirement. Most of us don’t consider ourselves investors, but it’s more than likely we’re already doing so through workplace pensions and this can make our money work as hard as we do. Taking this one small step could have a significant impact on finances in later life.”

Employers and industry also have a role to play in making sure everyone feels informed about their pension and empowered to make the financial decisions required to ensure it grows to a pot size large enough to suit their lifestyle.

Possession is just so important

If the heading of this blog sounds like the start[...]

My weekend behind the lens

Regular visitors to this blog will be aware that I've[...]

Putting a price on financial advice