The Briefing on Monday 19th February 2018

The Government is due to undertake a major review of university funding and student financing. In its unanimously-agreed Report on Student Loans, the Treasury Committee has made a series of recommendations, which the Government should address as part of its review.

The Government has argued that the interest rates on student loans are progressive. However, graduates with very large salaries may in reality pay less over their lifetime than lower-earning graduates as they can repay the loan quicker, and therefore pay less interest.

The Committee reports it has not heard a persuasive explanation for why student loan interest rates should exceed those prevailing in the market, the Government’s own cost of borrowing, and the rate of inflation.

The use of high interest rates on student loans is questionable. The Government has justified it on progressive grounds, but the Committee remains unconvinced as high-flying graduates may pay less than graduates on more modest earnings. 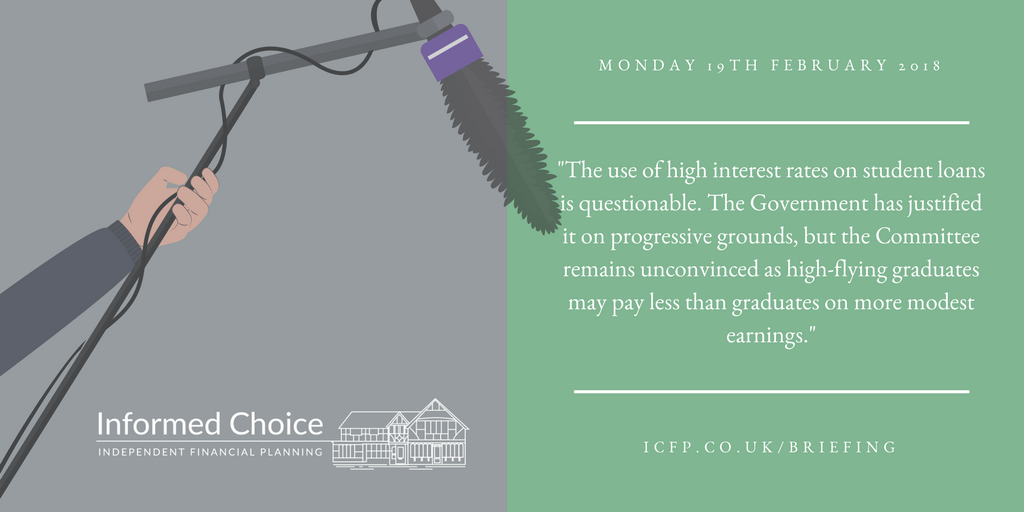 Plans announced by the Government will deliver less than 100 new low-cost rented homes a week, one-sixth of the extra supply needed – a level deemed to fall far short of the number required.

Unless the Government ramps up the supply of low-cost rented homes, England will see a shortfall of 355,000 affordable homes by the end of the Parliament, following successive years of undersupply between 2011 and 2022.

JRF is calling on the Government to use its forthcoming Social Housing Green paper to commit to building 78,000 affordable homes a year so more families can enjoy a decent and secure life.

Voters across all wage brackets want to see action on housing and it is simply not right that so many people in our country are locked out of the opportunity to build a decent and secure life because of crippling housing costs.

The forthcoming social housing green paper must commit to increasing the supply of low-cost rented homes. The Government can start by building 78,000 genuinely affordable homes a year. By fixing our broken housing market, we can help release people from the grip of poverty.

The Royal Mint has announced plans to create coins based on Beatrix Potter characters. Four new 50 pence coins will be made available, the first today featuring Peter Rabbit.

It will also be possible to buy coloured collectable versions of the coins, at either £10 or £60 each.

The collection is being made to commemorate 150 years since Beatrix Potter’s birth and are based on hand-painted illustration from Potter’s books.

This year we are delighted to present another group of Beatrix’s characters, giving them a new lease of life on our specially-designed coloured commemorative coins.

A new report by mutual insurer Royal London is offering a potential solution to the vexed issue of how to pay for long-term care. The paper, ‘Is it time for the care pension?’, calls on the government to introduce policy changes which would enable the creation of a new at-retirement product which would combine existing income drawdown arrangements with insurance against future care costs. The paper has been submitted to the Government and is under consideration by the team preparing the proposed Green Paper on social care.

More than 1 in 4 of us will spend some time in later life in residential care, and the total bill can easily run into tens of thousands of pounds. In extreme cases, people can be forced to sell their family home to pay for care.

It ought to be possible to take out insurance against this risk, but insurers are reluctant to offer products and consumers have been reluctant to take them up.

A ‘care pension’ could build on the increasingly popular ‘income drawdown’ product by adding in care insurance. To make this work, the government would need to make sure payments into such policies were tax-free, and would need to introduce an overall cap on lifetime care costs.

With these changes, millions of people could start to build up protection against the risk of facing ‘catastrophic’ care costs in later life.

Retail boss Sir Philip Green has been warned by MPs he will need to explain how pensioners will be protected in the event Arcadia is sold. The warning also suggests that regulators should have the power to stop any sale until pension scheme members have had a say.

Frank Field, chairman of the Work and Pensions Select Committee, is writing to Arcadia and the Pensions Regulator following reports that Sir Philip is in talks to sell some or all of his Arcadia retail empire. Arcadia includes the brands TopShop, Dorothy Perkins and Miss Selfridge. It reported sales of more than £2bn in 2016, and has 26,000 staff across 2,800 stores.

In his letter, Frank Field said:

The Pensions Regulator should have the power to temporarily hold a company sale until the issues of the pensions have been sorted out, so the pensioners would have a say at this crucial stage. 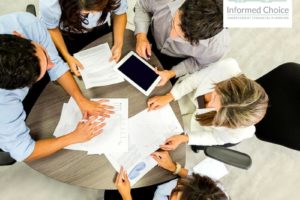 In our latest monthly investment update for August 2016, we look[...]

Informed Choice chartered financial planner Nick Bamford has been invited to present a webcast for Thought Leadership Live on the subject of Social Media or Business Death.

This afternoon saw the Treasury Select Committee receive evidence from two senior members of the Financial Services Authority (FSA) in respect of the Retail Distribution Review.